Apple has announced the launch of its ‘Find My network’ accessory programme to allow third-party Bluetooth devices to be tracked via iPhone, iPad, and Mac devices using the preloaded Find My app. The Cupertino giant has also brought an updated Find My app that features a dedicated Items tab to let its customers easily locate and keep track of all the compatible third-party devices. Apple has initially partnered with Belkin, Chipolo, and VanMoof that will bring their new devices eligible for the Find My network programme starting next week.

Belkin’s Soundform Freedom True Wireless Earbuds, Chipolo One Spot item finder, and VanMoof S3 and X3 e-bikes will be the first third-party products to have compatibility with Apple’s Find My network. However, Apple has opened up the ground for other manufacturers and products as well. 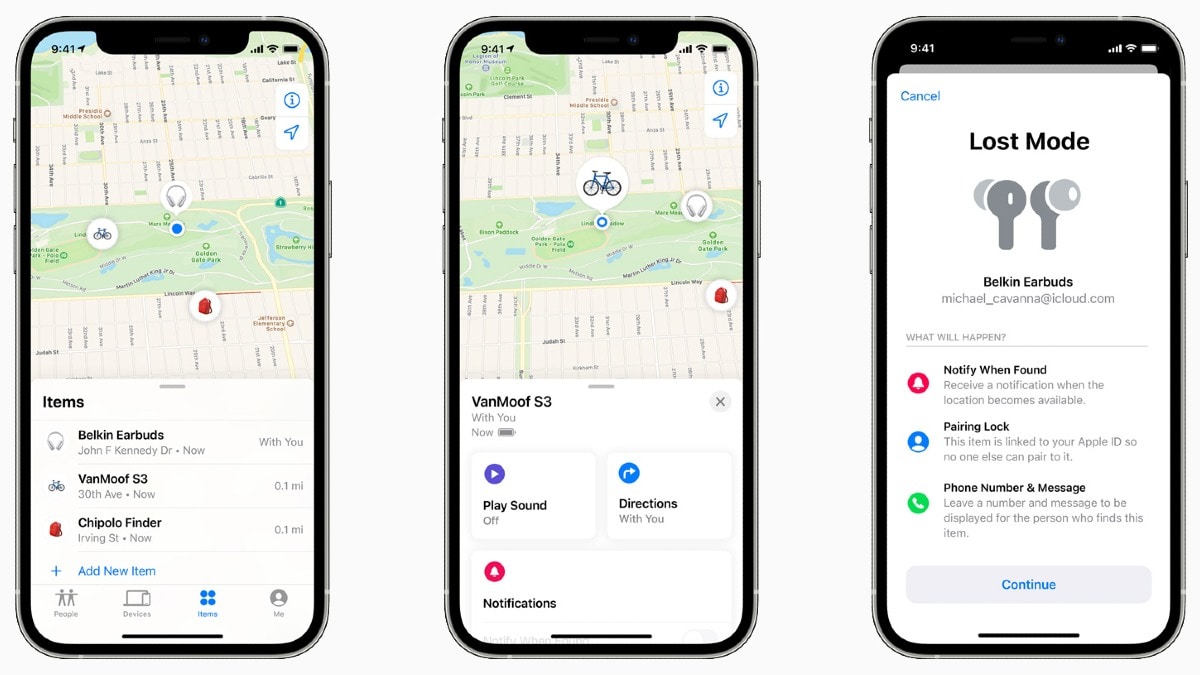 Customers will be able to add the approved devices from the Find My network accessory programme to the Items tab of the Find My app. Those devices will also be able to feature a “Works with Apple Find My” badge.

Apple has also introduced a draft specification for chipset manufacturers that will allow third-party device manufacturers to leverage the Ultra-Wideband technology offered in the U1-equipped Apple devices, including the iPhone 11 and iPhone 12 series, to offer more precise, directionally aware device location tracking when nearby. The draft specification will be released later this spring.

By launching the Find My accessory network programme and updating the Find My app with the Items tab, Apple has allowed its customers to get the same experience of locating the missing third-party accessories that they earlier had for finding missing Apple devices. The Find My app lets iPhone, iPad, and Mac users locate their lost items on a map, play a sound to pinpoint its location, and put it in Lost Mode to lock it immediately. The app also allows displaying of a message with a contact number of the owner and even remotely erase the data from the lost device in case it has fallen into the wrong hands.

In addition to the Find My app that enables location tracking of devices connected to the Internet, Apple has the Find My network that allows users to locate their missing devices even if they aren’t connected or couldn’t connect to the Internet. It works as a crowdsourced network of hundreds of millions of Apple devices that use Bluetooth wireless technology to detect missing devices or items nearby, and report their approximate location back to the owner.

Apple claims that the entire process of locating and tracking devices through the Find My network is end-to-end encrypted and anonymous, so no one else, not even the company itself or the third-party manufacturer, can view a device’s location or information.

Apple brought the last major update to the Find My app in 2019 when it combined the Find My Friends and Find My iPhone apps together as a unified app. That update was provided through iOS 13 and was also available on Mac devices through macOS 10.15.

The ability to track lost items through the Find My app offers a distinctive edge to Apple against Android devices that so far don’t have a similar native solution. Samsung is, though, trying to take on Apple’s Find My with its SmartThings Find that it expanded with the release of the Galaxy SmartTag in January.

However, the distinct experience through the Find My app brought Apple into trouble last year — when Bluetooth-tracking device maker Tile and other companies accused the iPhone maker of abusing its market power to disadvantage their competitive solutions.

Apple is also in the rumours for developing its own Bluetooth tracker called the AirTag that could take on similar offerings by Tile and other companies. However, with the introduction of the Find My network accessory programme, it becomes interesting to see what Apple would bring to its native offering in terms of providing a different experience over similar third-party Bluetooth tags.